PREFACE: This post is not for those with faint eyes, ears, minds or dispositions. I wrote this after many years of thinking about The Illuminati and wanting to try to find a way to summarize or show the essence of what they and other groups like them, are truly about. And the people within them. This is not me attacking religion as a whole or your view of the universe. I don’t know you well enough to do that. But what I am trying to do is illustrate THEIR mentality, logic, ambitions and sense of life. People always ask, “Do you believe evil exists?” I do not believe it does as a mystical entity, but I do believe it lives and inhabits the hearts of individuals and inside of The Illuminati at very complex and systematic levels. Remember, most of this has stayed hidden for the largess of history so I completely get if this seems out of left field or somehow strikes you as contrary to life and how it works and even seems fantastical. I am here to tell you it is not and that in time, you’d be wise to awaken to the realities. When I used to think about my own headstone and what I might want to be inscribed, I relished thinking something poetic, funny or flowery would be appropriate. And maybe one day I will still do that. But on some part of that headstone? I would like my message to the passerby to be — “Learn Everything You Can About The Illuminati & Fight Them To The Teeth With Every Bit of Love That Lives Inside of You.” That is my message to you the reader now and yes, perhaps one day to the reader of my headstone. So this post isn’t meant to be a complete analogy or explanation. Its a start of me grasping at some of the essentials only, but I believe even as this writing is, it hits pretty well home at the core of things.

The Book Can Be Bought Here

Bloodlines of The Illuminati 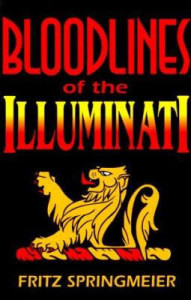