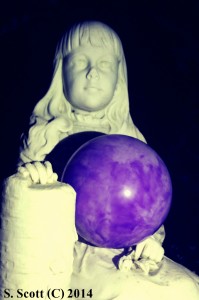 NOTE: Originally appeared in the online quirky magazine, Twisted South, and I am mentioned as the mysterious man of the cool business card. Any other implications to me in the writing are either highly exaggerated or completely true. As many know, there is a City Cemetery Policy against telling ghost stories or discussing anything psychical, paranormal or otherwise “creepy” in City of Savannah Cemeteries. And although this seems highly contrary to A, The First Amendment, but also in a city where the heritage of such discussion easily goes back to The Revolutionary War, if not prior, all the more curious. Noteworthy is that the City of Savannah government page has a Q&A section where in the Top 5 questions is strangely, “Are any of the cemeteries haunted?” As if this somehow is such an issue that they need to formally address it in a government way. Lo & behold there is actually a governmental answer and everyone should definitely check it out at the below link. http://www.savannahga.gov/faq.aspx

Part of my adding this article to my blog page is that I found it highly respectful of Savannah, the history and entertaining at the same time. I also address my feelings about said rules & their reasons in the article itself.

I went to Savannah, Georgia looking for ghosts, yet I’m the one who came back feeling haunted. For the past few years, I’d heard that Savannah was supposed to be the most haunted city in America. When I got the call to write a story for a magazine, I wasn’t sure I’d end up caring much about it because, frankly, I had some pretty cheesy perceptions of such things. I was leery. Now, I’d say never judge a ghost by its sheet!

As I poked around, it turns out in 2002 Savannah was dubbed “America’s Most Haunted City” by The American Institute of Parapsychology.  In no time at all (according to the city’s Visitors Bureau), it went from a town of five ghost tour companies to over 50!  So if Dahlonega, Georgia is known as the original Gold Rush town, Savannah may well be considered the original “Ghost Rush” town. Like any good prospector, I wanted to know if there were ghosts in dem thar hills (or swamps, but you get the point). I’d visited Savannah before and really took to the place, but I didn’t want to be too touristy this time around, so I decided to bypass the ghost tour scene. My aim was to grab up a few ghost stories from the locals and head out on my own. To be honest, it really seemed that everyone I talked to had the same story about this house or that hotel, with some variations. I was getting discouraged. But with one phone call, my angle (and my attitude) completely shifted to a single cemetery.

I was on the phone with a city person, and was trying to feel them out on why hauntings were such a big deal. At one point, I asked what seemed to be a perfectly normal question, “Do you have any haunted cemeteries?”

They muttered, “Umm…we don’t have any.”

I chuckled back, “How’s that?”

The person responded more convincingly, “None of our cemeteries are haunted.”

My curiosity was naturally raised by this retort, “Are you telling me that officially? How do you know that they’re not?”

More withdrawn, they replied, “Ummm…we have a city policy that there can be no discussion of ghosts or paranormal subjects on cemetery grounds managed by the city.”

I nearly dropped the phone. Although it felt very stop-the-presses, I could not get much more out of them and was shocked by what seemed a genuine nervousness around the conversation.

“You do realize you’re known as America’s Most Haunted City, right?”

“I’ve heard that, yes,” they replied.

Coyly, I asked, “So do Savannah’s ghosts just know to stay out of the cemeteries or do you tell them they can’t come in?” I had hoped to prompt a little laughter, but none came and I left them with a final query, “Ok, so if I wanted to not find some ghosts and not hear any ghost stories in a cemetery, where would be my best bet?”

“On or off the record?” they asked. “Off,” I told them. And then came the name…”Bonaventure.”

Once the name had been spoken, it was like it kept growing in importance. I started to see the name printed in tourist magazines, on brochures and heard the word coming out of many mouths in hotel lobbies and gift shops. I got the feeling this place was taunting me through total strangers. My curiosity only grew while feeling equally uneasy, like maybe I should ignore the voices. Unfortunately I couldn’t, and it got worse when a beautiful, smiling bartender named Sabine, standing behind the basement bar of The Olde Pink House, exclaimed, “Oh, you’ve got to go there! I know the perfect person for you to talk to.” She handed me the strangest business card I’d seen in a while.

Half listening to Sabine talk of being in Bonaventure late one night during a lightning storm with friends thinking they’d not live to see tomorrow, I stared hypnotized at a single large red eye staring out at me from this business card. Three links formed a crescent above it like a halo or bizarre eyelash. There was no name, just three initials, “S.S.S.,” but on the back of the card there was a winged hourglass graphic, and it boasted, “PROVIDING the Public with The Most Illuminating, Inimitable and Eternally COMPELLING TALES Currently Possible Here On Earth.” I felt like I was inside of an 18th century mansion root cellar and the ghost of P.T. Barnum had handed me his 19th century calling card through a gypsy woman. I half expected Sabine to be gone when I looked up, but no, thank God she was still pouring. Tomorrow I’d dial the number.

At first, I got the voicemail a few times, then finally a call back. The man’s voice was very pleasant and he sounded like he was a singer or a DJ.

Asking politely, “How can I help you, Byron?”

I spoke of my mission and he acknowledged my interest but after a few minutes of conversation he said, “I respect your interest but I really can’t comment on anything because it would put my livelihood at stake.”

He seemed genuinely guarded, “You see, I’m a believer myself, and have seen things, but to do what I do in the old guard’s cemetery, I have to keep the lid on that topic. It’s kind of a gentleman’s agreement out there.”

Inquiring further, “But why all of the secrecy? Don’t they know it just makes it sound more haunted?”

The man with the strange card thoughtfully answered, “I do, Byron, but really I think the intention is to guard the old cemeteries from exploitation. I think their hearts are in the right place, but it’s a kind of censorship, and you know, some of the earliest ghost stories themselves come from locals talking in the 18th century about the spirits of Revolutionary War soldiers coming out of the wall of Colonial Park Cemetery. That’s on record.” He went on to add, “Ghosts are a long-standing part of the city heritage and really, if told the right way, can act for sources of reflection on life and our values. Some scare a little, but you know, mostly they’re there to tell a kind of life story or comment on history in a different way. It’s not a bad thing, but some see it as making fun or something about life being cheap.” He joked, “Some story tellers are better at keeping it thoughtful and classier than others.”

He spoke of a tour that he did called Bonaventure After Hours which was the only cemetery night tour in the city.  He invited me along. Our conversation was like Savannah itself, a mixture of dualities and contradictions. Even though I’d not gotten what I’d hope to get out of him, I felt like I’d learned something very deep about Savannah. I was more eager than ever to visit Bonaventure.

Bonaventure Cemetery sits in a town that according to Savannah author, Tarrin Lupo, was named by pirates, as well as for the intense lightning storms that occur there. In the minds of most who live in the area, it’s still Savannah, but the old fishing village is technically a separate jurisdiction. Any town named by pirates has got to be good, so I made my way down Victory Drive to see the town, Thunderbolt, where Bonaventure rested. As I turned down the waterfront road, there were condos, a smattering of funky old cottages, a couple of shops and not much else. It was quaint, reminiscent of many New England port towns I’d grown up around. Smack dab in the middle of the main road was a large wooden cross.  I thought of John Carpenter’s The Fog and had visions of sailor ghosts with glowing red eyes wandering the streets.

I decided to pull into the parking lot of a restaurant that was all verandas and decks called Tubby’s Tankhouse for more story reconnaissance and a drink. The bartender, Sheila, was nice and without much hesitation, I told her what I was doing. Before I could even ask her, she was off and running with a story about working there and seeing a ghost in the kitchen. My mind began to wander and it struck me that people who live in Savannah are either slightly off, or there’s something about the environment that causes people to really see apparitions. Not expecting much, I asked her if she’d ever seen anything in Bonaventure itself.

Sheila paused for a moment and then offered, “Mostly spook lights and children’s voices…and their laughter sometimes.”

I gulped a little bit at her answer and asked, “What do you mean?”

She began, “Ever since I was a little kid, my friends and I, we’d sneak out there and just wander around, and we’d see these big balls of light jump across the path and sometimes rise up into the trees and sit in the crooks like they was birds perched or somethin.”

“Some were tennis ball size and then some bout as big as a basketball, I reckon,” she concluded.

“You said something about laughter,” I inquired.

“Yeah, it’s the darndest thing…we’d hear running in gravel behind us, feet skidding and pebbles going every which way, and then kids laughing like they were right behind us and all around us, and then we’d see the spook lights,” Sheila said, somewhat elated.

Beyond curious, I pressed, “Sheila, why do you think all of that is happening?”

Her answer was touching and amusing. …“Well we used to call it Heaven’s Playground as kids…there are more kids buried out there than anything and we kind of saw it like Heaven was letting them come out at night to play with us real kids.”

I thanked her, paid my bill and set off to see a place that now felt more mythical than real. Bonaventure.